Pesaro is a town of about 100 thousands people on the northern adriatic coast of Italy. Its Public Administration has been facing lots of critics from Free/Open Source software supporters because, in the last five years, it changed twice the same, important part of its ICT infrastructure. Both those changes bring consequences and open issues, both for the critics and for Pesaro, that have had little or no coverage at all so far, especially outside Italy (1). Before talking about them, however, it is necessary to summarize what happened.

The first move was the migration, in 2010/2011 of 504 desktops from Microsoft Office to OpenOffice. The second, decided in November 2014, was a U-turn: sorry, we were wrong, let's migrate to the latest and greatest from Microsoft, that is Office 365, to do lots of things better, even working in teams and online.

Today's critics come both on the functional reasons of the return to Office, which an italian commenter described as "they just said whatever came up first in their brains", and on the economic ones, which were made public only six/seve months after the decision, inside a report funded by Microsoft. From that report it looks like:

First, the actual costs for OpenOffice training in 2011 were the same as the maximum declared for Office 365 training in the new migration. A fact that, joking, we may also consider as an official confirmation, from Microsoft itself, that switching to Open or Libre Office is not more expensive, as far as training is concerned, than switching version of Microsoft Office. But I'll get back to this in another article.

Second, the studies to prepare the migration to OpenOffice were bad, the implementation worst and not even completed. On the training side, there were reports of "just a short presentation of Open Source and OpenOffice in late 2010, and one short course in late 2011″. Besides that, the Administration discovered that water is wet, but only by crossing the river, instead of actually looking at it before. Basically, city employees and sysadmins discovered only after migrating to OpenOffice that the Town of Pesaro, like 90% of Public Administrations and other great organizations worldwide, fights against software and itself, because:

Third, this is not even a comparison between apple and oranges, but between apples and fruit salad, home delivered. Office 365 does much more than OpenOffice or Libre Office, and this cannot be ignored. Of course, if one  can or wants to eat only apples anyway, he'd better not buy the fruit salad.

Fourth, costs, and where they end up. The money that Pesaro spent (badly) on OpenOffice at least remained, I suppose, mostly in Italy, to benefit italian tax office and workers. Microsoft, instead, pays VAT in Ireland. This said, let's look at some figures. Pesaro did a U-turn because, says the report mentioned above, using OpenOffice cost 530 Euros per employee/year, while Office 365 should only cost 197, which become 112 once you factor in the 85 Euros saved on phone calls, business trips and other activities, thanks to the teamwork features and cloud support of that suite. 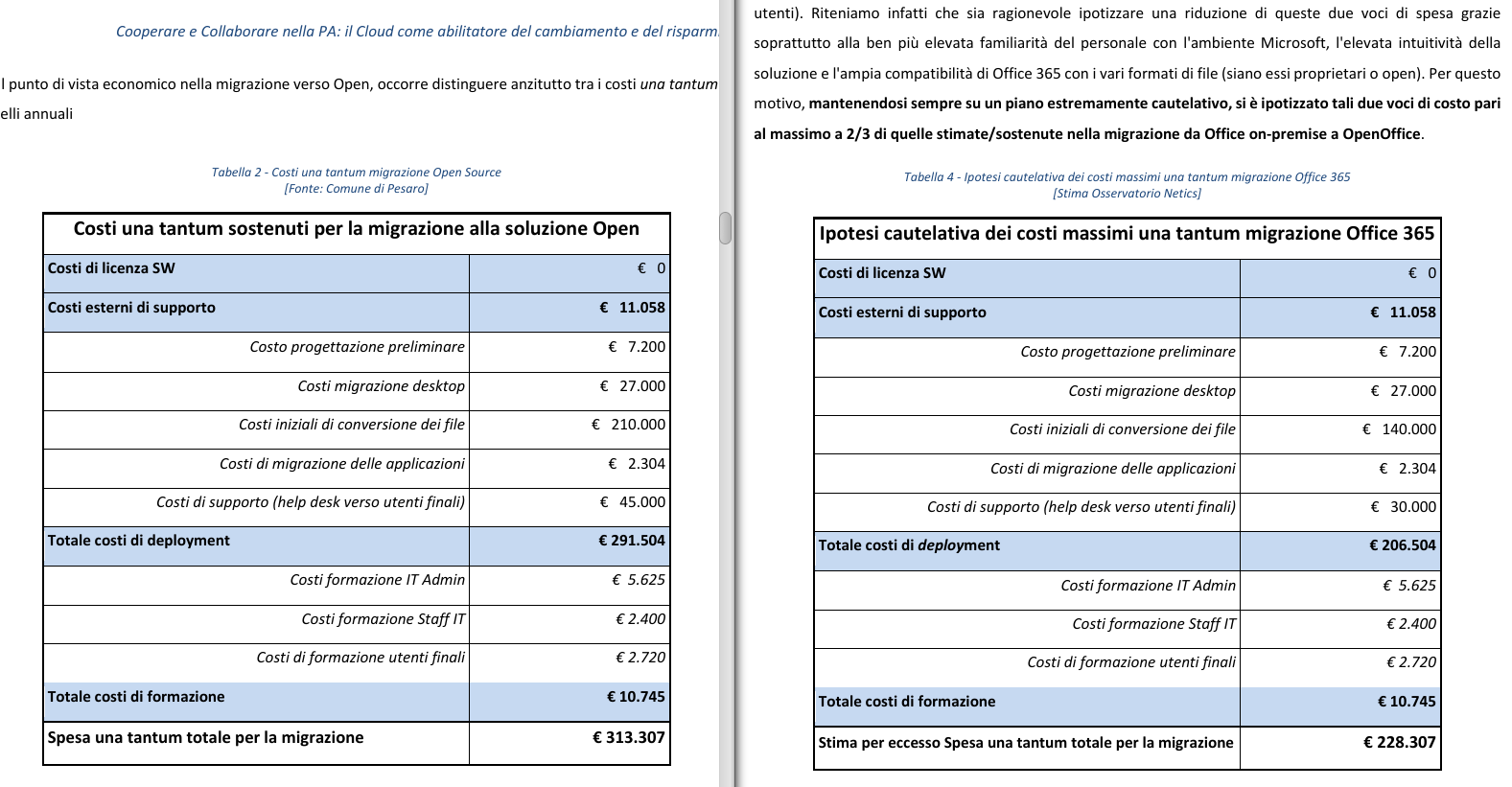 There is one thing I haven't understood. This interview says that (emphasis mine):

the expense of using OpenOffice from 2010 to 2014 was 300K Euros, of which 210K estimated as follows: in the four years considered, moving from one suite to another showed to be very expensive, in terms of time spent converting files, rewriting macros and much more, resulting in one full person-day per year, for 350 employees.

From that estimate, and using 150 Euros as average cost of one person/day (both numbers feel fine to me) we obtain exactly 210K Euros (350*4*150). But the parts in bold in the quote above had led me to believe that they were talking of what, in the report tables, is called costs for lost operativity recurring each year ("costi operatività utenti finali"). The only "210K" in the report, instead, is already included in another row of the same tables, the one called "quota annuale dei costi una tantum per la migrazione" that is "yearly quote of the una tantum cost of migration". Now, unless the same cost was added twice (and calculating it in different ways each time), where do the "costs for lost operativity recurring each year" come from, especially considering that they are three times higher than the "una tantum" part? Again, I'm not sure about this part. Of course I'll let you know when I get explanations.

End of the first half

The first image of this post comes from an article commenting the fact that, just in the 2014/2015 season,  the soccer team of Pesaro gained… "the second relegation of the new century". Too good a coincidence to not use it.

We have seen that all the costs and data published so far must be explained better, and used with careful consideration. As far as I am concerned, however, they already confirm what I said at the beginning: both migrations bring consequences and open issues, both for the critics and for Pesaro, that still must be discussed. I'll do that in the next post, so stay tuned.

If you like this post and the mission of this website, please help me to write my NEXT million words. Thanks in advance for your support!

« What do USA special forces and Mexican drug lords have in common?
Pesaro, Microsoft and OpenOffice: the consequences »